​What Is a Chronograph Watch?

Learn everything you need about chronograph watches: their history, functions, purpose, how best to use one and how they differ from other watch types.

Definition of a Chronograph

A chronograph watch is a specific type of watch that, in addition to functioning as a regular display watch, also features a stopwatch mode. Typically, you can easily distinguish a chronograph watch from other watch types by observing its face. They usually feature additional, smaller subdials (usually two or three) embedded into the primary dial, each with its own needles.

The etymology of the word “chronograph” is derived from the Ancient Greek “khronographos,” (Latinized form of χρονογράφος) which translates to “recording of time” (from “Khronos,” the Ancient Greek personification of time, and “graphos,” meaning writing or recording). The word “chronograph” should not be confused with “chronometer.” That term is simply another word for watch or clock.

Most multi-function digital watches made since the 1980s can technically be described as chronographs in that they offer both time-telling and stopwatch functions. However, the luxury watch industry typically reserves the term to 100 percent mechanical watches with analog displays, marking a clear distinction between the two.

The first chronograph was invented in 1816 by French horologist and sculptor Louis Moinet, although his device bore a different name: “Compteur de tierces,” French for “thirds counter.” Here, the word “third” refers to an obsolete subdivision of time corresponding to 1/60th of a second.

Moinet’s device was precise enough to measure time down to the nearest third. It was certified by Guinness World Records as the first-ever chronograph and one of the most accurate time measuring instruments of its era.

Another device, invented in 1821 by French watchmaker Nicolas Mathieu Rieussec, was the first device explicitly named “chronograph.” It was the “Chronograph with Seconds Indicator,” developed at the request of King Louis XVIII. This device was long considered the first chronograph until the Guinness certification proved otherwise.

Other notable advances in chronograph development include:

Although the chronograph was once primarily associated with military applications (especially artillery units), today’s versions are popular with aircraft personnel, divers, submariners, racing drivers, athletes and watch lovers and enthusiasts of all kinds.

How to Use a Chronograph

Whether you have an IWC, Blancpain or Jaeger-LeCoultre watch, all modern chronograph watches possess the same standard features:

How to read the sub-dials

Some chronographs, such as the Portugieser-series IWC watches, feature two sub-dials instead of three. Typically, 2-sub-dial models exclude the “hours elapsed” dial found on 3-sub-dial models.

How to use the stopwatch mode

When the stopwatch function is running, the smallest needle on the main dial is used to count seconds.

The primary advantage of a chronograph watch is that using stopwatch mode does not stop or interfere with the primary dial’s hours and minutes needles, letting you read the current time whenever desired, even while using the stopwatch functions.

How to use the tachymeter

The tachymeter on a chronograph is an instrument designed to measure speed. The tachymeter may either be fixed (engraved into the dial’s inside track or the watch’s bezel) or rotating (you can turn the bezel piece). Tachymeters are independent of a specific unit of speed. You only need to know the precise distance between two points to make an accurate calculation.

For example, if you are trying to measure the average speed of a car on a 1-mile track section, start the stopwatch when the car enters the section and then stop it when it passes the finish line.

The seconds needle will point at a number on your tachymeter. This is the car’s speed in miles per hour. So, if the needle points at 120, the car’s average speed was approximately 120 mph.

You can also use the tachymeter to measure different speed scales, such as a runner or a flying plane. For example, when calculating the speed of a runner on a 200-meter track, use 200 meters as your fixed distance, start when the runner begins and stop when they pass the finish line.

If your stopwatch lands at about 25 seconds, your tachymeter might suggest an impossible speed (approximately 145 km/h). In reality, since the known distance is 200 meters (⅕ of a kilometer), divide the reading you obtained (145) by 5 to obtain the actual result: approximately 29 km/h.

Many chronographs feature additional functions not commonly found on other models. They include (but are not limited to) the following:

Sell or Trade Your Luxury Watch

Top Reasons to Use a Chronograph

If you’re wondering whether chronograph watches are for you, here are the top four reasons why watch collectors and enthusiasts enjoy using and wearing them.

Besides functioning as beautifully-made watches, chronographs offered multiple useful tools and functions on top of time-telling long before the smartphone did. Although the smartphone has become the more convenient tool for many applications today, an analog-display chronograph is the watch equivalent of a multitool. Its functions are always available and work 100 percent of the time.

Depending on your model, your chronograph watch can help you tell the time in multiple parts of the world, function as a basic calendar or moon phase indicator, help you measure your heart rate or make a precise estimate of your distance from a thunderstorm. And with the help of basic mathematics, the tachymeter function can help you calculate the average speed of almost anything.

Chronographs have an impressive appearance, unlike any other timepiece. The multiple sub-dials, pushers and slightly larger case size make them statement pieces prized by luxury watch collectors. They are typically crafted from premium materials, including those developed in-house by luxury watchmaking brands, such as Cerachrom, Rolesor or Everose. This allows them to withstand the rigors of a multifunctional time-keeping device and gives them an unmistakably luxurious look.

Some of the horological world’s most coveted timepieces are chronographs, including the Rolex Cosmograph Daytona, famously worn by Paul Newman and auctioned for a record-breaking $17.8 million. These watches carry a level of prestige that adds to their aesthetic allure for many wearers.

3. They are mechanical marvels

Compared to a standard, time-only watch, a chronograph is significantly more mechanically complex, requiring many types of unique inner parts and elements in their construction (e.g., column wheels, cams, etc.).

While an average wristwatch may comprise 60 to 200 parts depending on its make, model and age, a chronograph watch can have as high as two or three times more, despite not being significantly larger or thicker.

Watch enthusiasts and collectors appreciate the time and effort spent assembling each chronograph watch. There is no better symbol of your appreciation for fine watchmaking and quality craftsmanship than wearing a luxury chronograph watch.

4. They have a higher investment value

Many luxury watches are purchased as heirloom or investment pieces to diversify a portfolio. However, to get the most out of your investment, you need to ensure that you buy a watch that regularly appreciates in value. The criteria that make a watch a good investment include rarity, brand reputation and market demand.

Chronographs are some of the most prized timepieces by collectors, so you are likely to find a buyer for your watch quickly if you decide to sell. Due to their mechanical complexity and time-consuming manufacturing process, chronographs are typically released in small batches, contributing to their rarity and driving consumer demand.

If you’re interested in obtaining a new chronograph watch today, here are our top three recommendations.

Forever associated with elite motorsport since its release in 1963, the Rolex Cosmograph Daytona is an icon of the prestigious watchmaking brand’s lineup. The ref. 116503 features three counters, two pushers and a tachymetric scale, allowing drivers to measure elapsed time and cementing its place as the ultimate watch for endurance racers.

This men’s chronograph watch is part of Blancpain’s famous Fifty Fathoms collection, the world’s first modern diver’s watch. Built on the Blancpain F185 caliber, it comprises 308 components and 37 jewels and features an autonomy of 40 hours.

As one of the world’s premier diver’s watches, this chronograph’s 45mm case is made of stainless steel and is rated at 30 bars of water resistance, allowing it to function at depths of up to 300 meters (1 bar = 10 meters of depth).

The IWC Pilot Spitfire, initially designed for RAF fighter pilots, exhibits rugged durability and understated design features that make it a standout model among chronographs. The Arabic numerals and hands are coated in luminescent film for optimal legibility against the black dial. The NATO-style bracelet makes this a stunning addition to an everyday ensemble.

Find Your Perfect Chronograph at Luxury of Watches

Begin your search for the ideal chronograph watch today at Luxury of Watches. We carry a comprehensive selection of the world’s finest timepieces, crafted by the most trusted watchmakers: Audemars, Blancpain, Breguet, Breitling, IWC, Jaeger-LeCoultre and Panerai. 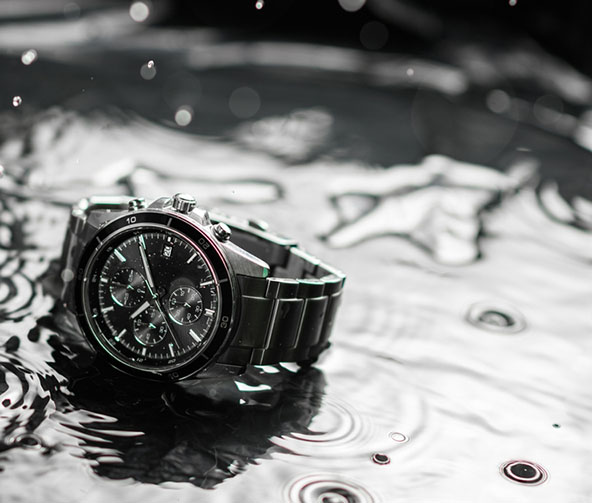 Our entire inventory is 100 percent authentic, and each watch comes with a comprehensive 5-year warranty for your peace of mind. For more information on our watch selection, contact us at (213) 291-2130.

Newer Starting A Watch Collection With €5,000: Jorg’s Picks From Grand Seiko, Tissot and Serica
Back to list
Older Hands-On With The New Fortis Stratoliner: A Watch Designed And Tested For Space Travelers